Following the much-hyped implosion of the Riviera’s Monaco tower on June 14, 2016, it’s back to business-as-usual for the hotel’s demolition team.

One of The Strip’s most infamous fails has now fallen victim to heavy machinery, as the Riv’s abandoned pool is being transformed into rubble.

The pool in question was built in 1987. The pool is situated over the north side of the Riviera’s casino.

The pool was never used because it was built poorly and leaked into the casino. The defective pool wasn’t easy to find, but we managed to do a security breach for posterity before the Riviera closed on May 4, 2015.

The Riviera’s rooftop pool is the stuff of Las Vegas legend. Now, it’s becoming a memory.

The front of The Riv has pretty much been stripped clean. Here’s a bird’s-eye look at the abandoned pool, the hotel’s facade and the two stories of rubble from the 24-floor Monaco tower implosion.

Several structures remain at the Riviera site, including another tower, the Monte Carlo, slated for implosion in August 2016.

Here’s a shot of the south side of the Monte Carlo tower. Behind that, an empty space that was the Riv’s convention center.

The other side of the Monte Carlo tower has been wrapped in plastic in preparation for the implosion. Insert your favorite “safe implosion” joke here.

Please partake of our Riviera demolition photo gallery, for soon it’s all we’ll have left of this Las Vegas classic. 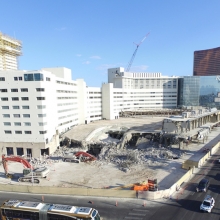 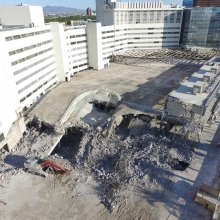 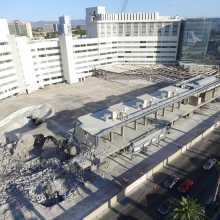 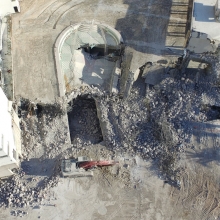 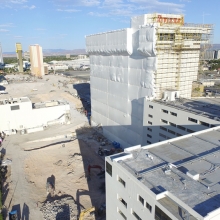 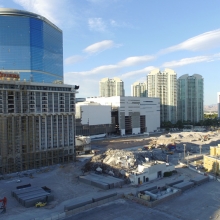 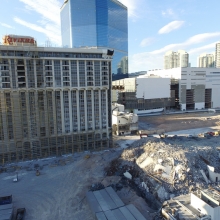 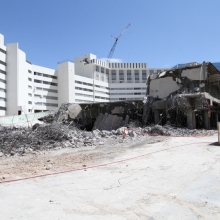 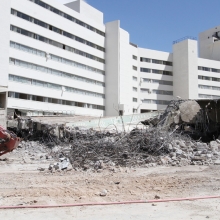 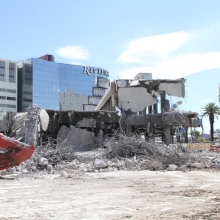 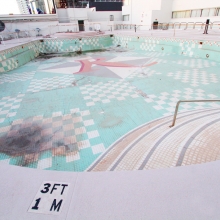