Two of our favorite Las Vegas P.R. buzzwords are “jaw-dropping” and “game-changing.” We’re happy to report the under-construction Las Vegas Arena is set to both drop jaws and change the game.

The new Las Vegas Arena (currently seeking a naming rights partner, so expect it to be
called something else), has reached a turning point in its construction. The “rough”
construction of the 20,000-seat venue is nearing completion, and the project is moving to
the “finishing” stage. The arena’s seats, for example, will be installed in November 2015.
The arena’s final steel beam was put into place on May 27, 2015.

The Las Vegas Arena, a partnership between MGM Resorts International and AEG Live, is
expected to open in April, 2016.

It’s hard to describe the splendor that is the Las Vegas Arena, so we took some photos
which also don’t really capture the splendor, but they’ll have to do for the time being.

While much has been written about the arena itself, some of the most compelling aspects of
the project are around it. An entirely new entertainment and dining district, The Park is
being built between Las Vegas Boulevard and the arena.

The Park originally was going to have several more retail and dining concepts, but MGM
Resorts decided to build a 5,300-seat theater instead (reported first on this very blog,
because that is how we occasionally roll).

Those distinctive reddish things are pieces of art that will also provide shade for visitors to The Park, between the Monte Carlo and New York-New York resorts. Monte Carlo will get a new name soon, by the way, which we’d mention was also reported first in this blog, but we prefer not to dwell on such things due to our extraordinary modesty.

Outside the arena, there will be a two-acre area called Toshiba Plaza, with entertainment
programming before, during and after major arena events. Oh, and also on days when there’s
nothing happening at the arena.

Toshiba Plaza will hold between 5,000 and 7,000 people and will have three stages. One
stage, the “Plug’n Play,” will set on the ground floor outside the arena. Another stage
will be in front of the New York-New York parking structure and a third, a movable stage,
will be on the opposite (north) side of the plaza.

The Las Vegas Arena itself will have 30 entrances.

When completed, the exterior of the arena will have a giant LED video mesh screen. Probably something along these lines. Below, you can see where the video mesh will attach.

The Las Vegas Arena is set to host about 100 events a year, including 50 concerts, 25
sporting events (including 15 UFC boxing matches) and five award shows.

So far, just a couple of events have been confirmed at the arena, including a string of
shows by George Strait, a May 14, 2016 concert by Janet Jackson and the PBR World Finals
(Nov. 2-6, 2016).

The arena will also be the home of a new NHL expansion team, so fans can anticipate 41-43
hockey games per season. The new team won’t take up residence in the Las Vegas Arena until
2017.

Are we having fun yet? Because we had a blast seeing the Las Vegas Arena, even in its
unfinished state.

We honestly had no idea what a thing arenas have become. It’s an experience far beyond
what’s onstage or on the ice.

For example, the Las Vegas Arena will feature a number of lounges and Tower Clubs. The
Tower Clubs are a wonder to behold. They’re 100 feet up and jut out over the seats below.
Each Tower Club has a 125-person capacity.

The arena’s two Tower Clubs will be run by a Las Vegas nightlife operator that hasn’t been
officially announced yet. There aren’t all that many, so you have about a 50/50 shot at
guessing it.

There’s also a bridge spanning the arena with a lounge that will accommodate 150-300
people.

We’re not sure how the success of an arena is measured, but it has to be a huge win that
every single one of the Las Vegas Arena’s 42 luxury suites has already been sold. They go
for about $200,000, so that’s no small feat. There’s even a waiting list in case anyone’s
check bounces. Assuming people still writes checks, which we’re fairly sure they don’t.

The scale of the $375 million Las Vegas Arena is overwhelming. About 2,500 construction
workers are making the arena a reality.

Here’s another angle on the model of the arena and the adjoining New York-New York parking garage.

The fifth floor walkway will span the two structures, below.

The new arena is going to wow even the most jaded Vegas enthusiasts, and logistical
concerns (like parking) will fall by the wayside when the Las Vegas Arena and The Park
become the new heart of the Las Vegas Strip.

Enjoy more exclusive photos in the gallery below, and join us in our unabashed, borderline annoying, gleeful expectancy as we giddily anticipate the opening of the jaw-dropping, game-changing, breathtaking Las Vegas Arena. Or something. 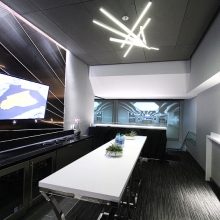 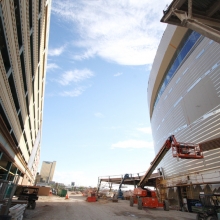 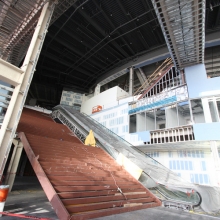 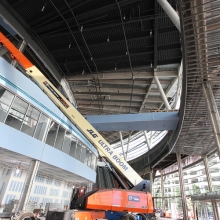 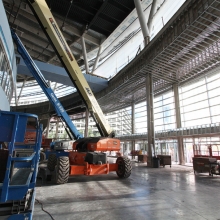 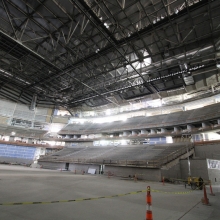 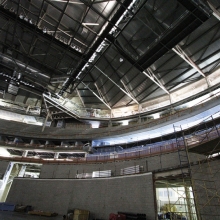 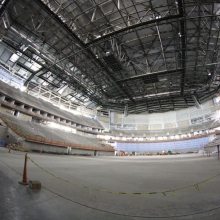 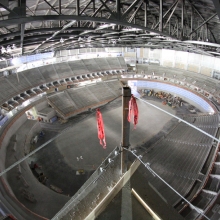 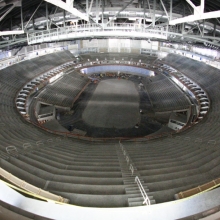 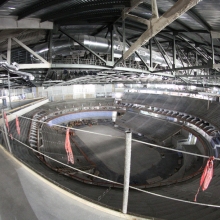 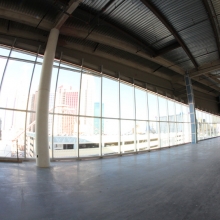 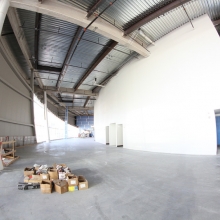 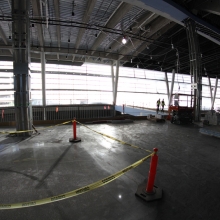 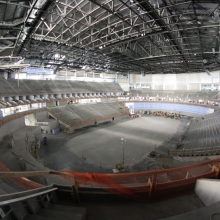 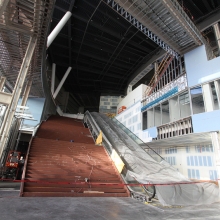 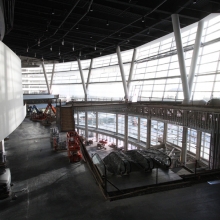 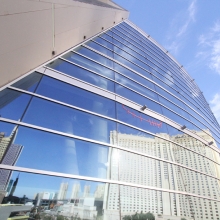 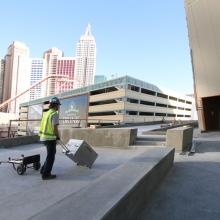 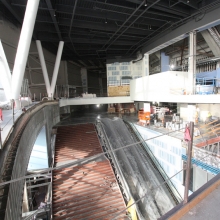 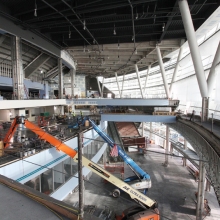 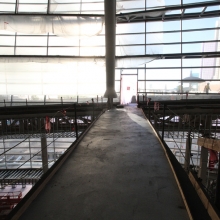 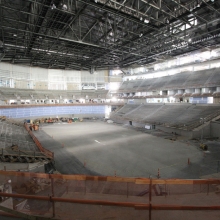 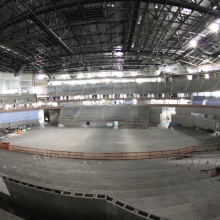 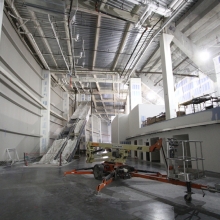 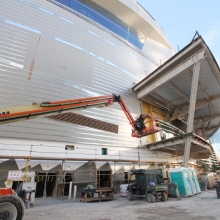 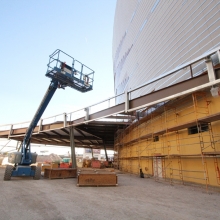 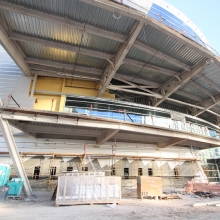 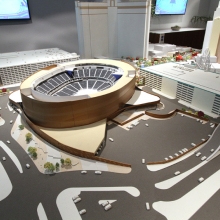 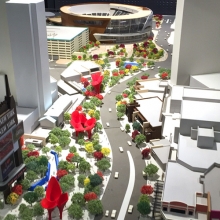