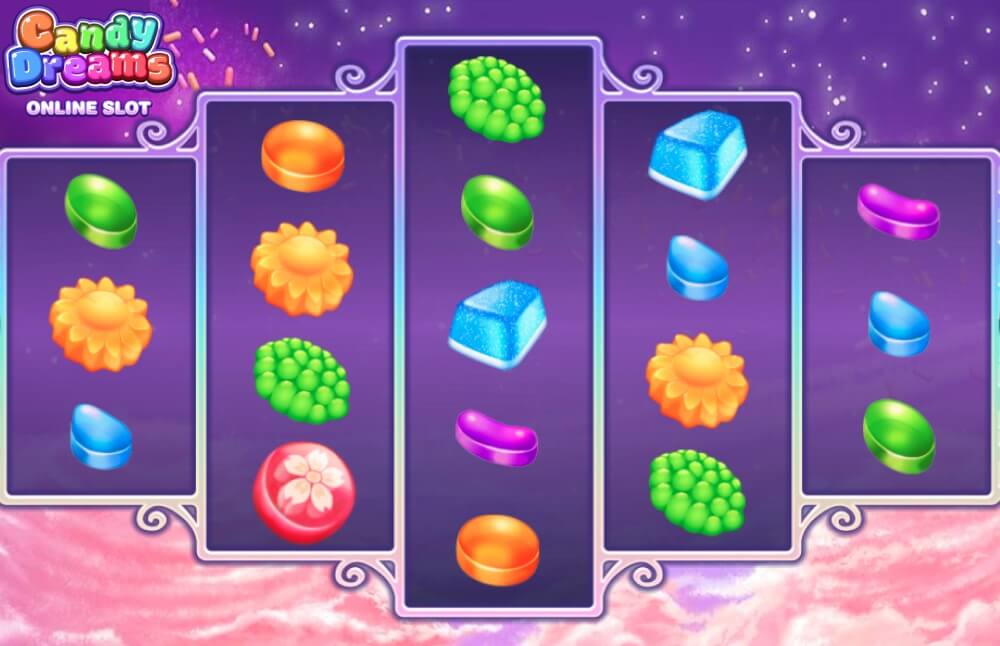 Candy Dreams looks good enough to eat. This five-reel game by Microgaming is inspired by all things sugary and sweet, and it has the power to award some truly fantastic treats. There are 720 paylines in this game, which means the potential to create winning combinations is huge.

There are several special features to look out for here, from the free spins round to the epic candy planet bonus. Candy Dreams works on mobiles as well as desktops, and the mobile version delivers the quality graphics and fast-paced gameplay that you’d expect from a Microgaming slot machine.

The reels are filled with glossy, brightly colored candies, set against a pink and purple backdrop with rainbow sprinkles. The theme works well on all screen sizes, and will definitely appeal to those looking for a slot machine that offers something a little out of the ordinary.

Atmospheric sound effects add to the thrill of the game, and the celebratory noises you’ll hear when you create winning combinations are great fun too.

Play on all mobile devices

Huge prizes to be won with the candy planet bonus

How To Play Candy Dreams

Candy Dreams is a five-reel game from Microgaming. The slot machine has a traditional style of gameplay, but it works slightly differently in terms of paylines. Instead of fixed paylines, there are 720 ways to win in this game. This means that winning combinations can be created in any direction, and there’s no need for players to choose which paylines to activate before starting the game. To set the game up, it’s just a case of opening the title, choosing how much to bet and then hitting the spin button to start the game.

Candy Dreams is well known for its bold colors and eye catching design. The game takes its inspiration from the magic and wonder of a traditional sweet shop, and the symbols look just as tempting as all the old sweet shop classics. The backdrop is an ombre pink and purple design, with rainbow sprinkles cascading down from the top of the screen. The symbols take the form of different types of candy, in a range of striking colors and shapes. There are also special symbols such as the rainbow wheel scatter, Candy Dreams logo, wild and present bonus symbol.

There are several different special features to be aware of in Candy Dreams. The game includes a wild symbol, which is the word ‘wild’ in a rainbow pattern. The candy dreams logo and present symbol also serve as wilds, and can help to create winning combinations throughout the game.

There’s a rainbow wheel candy, which is this game’s scatter symbol. If three, four or five of these appear at any one time, the free spins round will be triggered. This awards the player 12 free spins, during which more free spins can be won if the gold present symbol appears on the centre reel.

The Candy planet bonus is a mini bonus round which is activated whenever three of the globe symbols appear on the screen at once. If this happens, players will be able to choose different globes to reveal a prize hidden behind them. The round ends when the player finds the popping candy.

Candy Planet is one of those games that looks just as good on smaller screens as it does on larger ones. With its striking color scheme and high contrast symbols, this game was made for mobile play. The game can be accessed via any good quality mobile casino, and it’s available to play within the web browser of mobile devices. So there’s no need to worry about downloading an app to play Candy Planet on the move.

The mobile version of Candy Planet makes full use of the touchscreen capabilities of mobile devices, and it’s been designed to work seamlessly with Apple and Android devices. The mobile game includes all the same bonus features and special effects that the desktop version has, and it’s just as much fun to play.

Candy Planet is a feature-rich game offering top quality graphics and animations. The game is fully themed, and its sugary sweet theme shines through in its design, bonus features and sound effects. Suitable for mobile devices as well as desktops, Candy Dreams is a popular slot machine offering some very generous prizes. There are huge jackpots up for grabs, and with 720 ways to win this is a fast-paced game that’s always exhilarating to play. The game has some excellent bonus features, and the free spins round is easy to trigger. Try Candy Crush on your desktop or mobile to see what treats the game has in store for you.