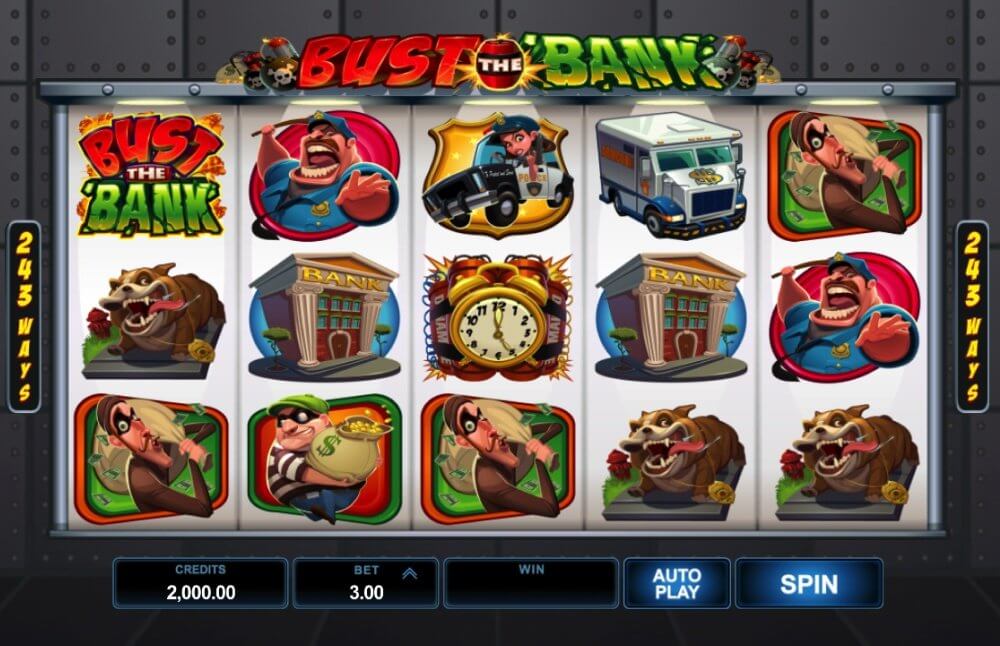 This heist-themed slot machine from Microgaming is guaranteed to get pulses racing. The five-reel game has 243 paylines, so winning combinations can be created in any direction. The game is packed full of exciting bonus features, and there’s a fun soundtrack running in the background too. Bust the Bank works on mobile devices and desktops alike, and it’s well suited to smaller screens. The graphics are of good quality, and we particularly liked the animations that appear every time a winning combination is successfully created. There’s a good free spins round in this game, but that’s not the only bonus feature players will want to be aware of. Bust the Bank also has two cash prize bonuses, symbolised by a safe and piggy bank. When these appear, coins pour forth and the prize money stacks up.

The game comes to life when winning combinations appear

Top 5 reasons why we rated Bust the Bank: Excellent

How to play Bust the Bank

Bust the Bank is an immersive and truly captivating game from Microgaming. The game packs a punch in terms of graphics, and delivers some of the great quality animations that we’ve come to expect from this world-famous software developer.

The game is inspired by the idea of a bank heist, and it takes its riches and wealth theme very seriously. The entire game is set within the bank vault. The five reels of Bust the Bank are home to a whole host of heist-themed symbols, ranging from specially developed thief characters, to the policeman and car chasing them down. There’s a bank, a police dog and even sticks of dynamite bound together with a sinister looking alarm clock timer! The scatter symbol is a lit bomb, emblazoned with a skull and crossbones.

There are 243 ways to win in this game, so players don’t need to activate paylines before they play. Setup is incredibly simple. To play Bust the Bank, simply open the game, choose how much to bet per spin and start spinning the reels. Winning combinations can be made across 243 different lines, so as long as matching symbols land in an adjacent pattern a payout will be triggered.

Bust the Bank jackpots and bonuses

Bust the Bank is a feature-rich game, and there are plenty of interesting bonus rounds to look out for. Microgaming has packed this game full of different features, many of which can be triggered relatively easily from within the base game.

One of the most exciting bonus features in this game is the safe bonus. This is activated whenever a safe lands on reels one or five. When this happens, the safe door swings open and coins start to cascade out of the safe, topping up that all-important bankroll. Prize money increases further if other high paying symbols happen to be beneath the safe when the bonus is activated.

Another cash prize is activated whenever a piggy bank appears in any position on the third reel of the game. If you see the piggy bank, you’ll be invited to smash it. As the pieces burst across the screen, a cash prize is revealed.

There are two thieves on the reels in this game, and they’re called Larry and Bob. Sometimes, Larry and Bob might dash across the screen during gameplay. If you see the thieves running, you’ll trigger another bonus prize.

The bomb scatter symbol is the top paying symbol in this game, and it also triggers the free spins round. Land three or more scatters and eight free spins will automatically be awarded. The first and last reel are wild during this round, and additional free spins can be won if a scatter appears.

Bust the Bank is a mobile-ready slot machine which works well on all the most commonly used mobile devices. The game has been designed with mobile compatibility in mind, so it’s perfect for those playing on an Apple or Android device. Play on a smartphone or tablet, and you’ll enjoy the same good quality graphics as you might expect from a larger screen.

All of the bonus features and special effects are incorporated into the mobile version of the game, so players have just as many opportunities to unlock cash prizes, jackpots and other bonuses. There’s no need to download an app to play, either. Bust the Bank can be played within the web browser of a mobile device.

Bust the Bank is a fun themed slot machine, designed by a world-leading software developer. The five-reel game is perfect for mobile players, and it looks brilliant on desktops too. Inspired by a classic bank heist, Bust the Bank is a light-hearted game with intricately designed themed symbols, and great animations and sound effects. The RTP is good, and there are many opportunities to create winning combinations as you play. The bonus features really take gameplay to the next level, though. Look out for a whole host of entertaining features, from cash prize bonuses to a free spins round with wilds and scatters on the reels.