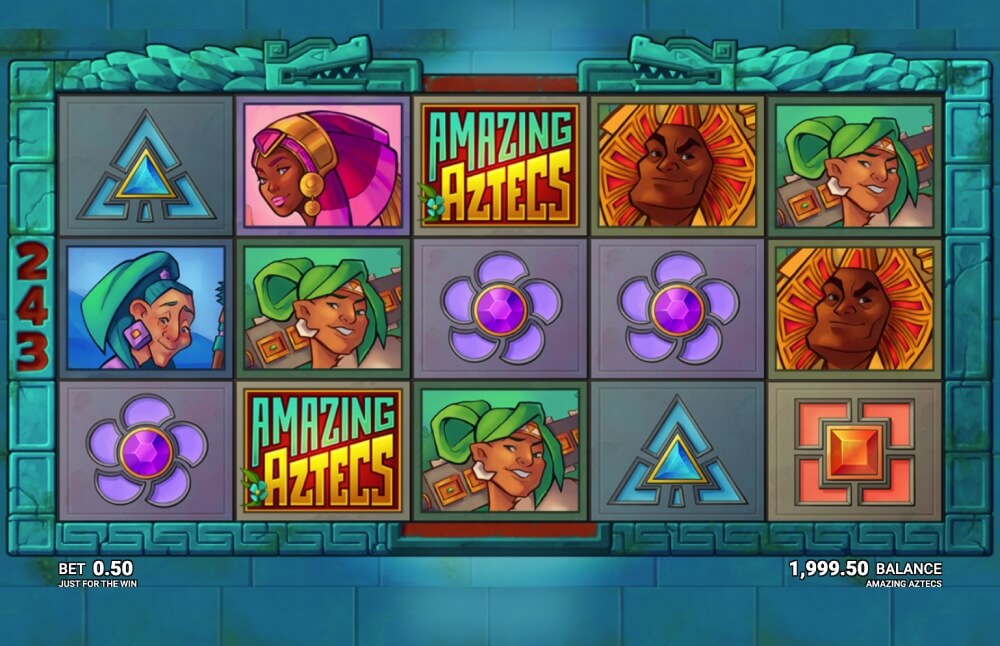 Set in the ancient world, Amazing Aztecs is fully themed and ready for action. The game has five paylines, and there are 243 ways to win, as symbols simply need to be adjacent to each other to trigger a payout. At its heart, this is a fairly traditional game, shying away from some of the more complex bonus features that Microgaming has become known for. There are no wilds or bonus symbols, but there is a giant respins feature, which comes into play whenever a winning combination appears. Amazing Aztecs fits the bill for mobile players, available to play instantly without the need for downloads. Try it out and see if you can activate the top prize – an incredible 824x your total bet.

Win up to 10x your stake

Raise the stakes to win big

Create winning combinations in any direction

How To Play Amazing Aztecs

Amazing Aztecs is a five-reel game with 243 ways to win. This means that winning combinations can be made across 243 different paylines, and every single one is activated whenever a player spins the reels. Unlike classic slots, players don’t have to choose which paylines to play, and so the game is incredibly fast-paced and highly engaging.

While there’s no wild symbols in this game, players will find it easier to trigger payouts thanks to the huge number of paylines in action. The game is light on bonus features, so you won’t find stacks of special symbols such as scatters here. Instead, symbols have been designed with simplicity in mind, creating a game that’s very easy to get the hang of.

The Aztec theme is evident in the game’s look, symbols, sound effects and even its bonus features. Microgaming created four Aztec characters specifically for this slot, and they appear on the reels alongside Aztec jewels in the brightest and boldest colours. Each one contrasts well with the teal backdrop of the reels, creating an impressive looking slot with a tried and tested layout.

Amazing Aztecs isn’t one of Microgaming’s more complex slots. The game is designed to be simple, so there aren’t too many bonus features that players need to know about.

There are no wilds or scatters, but don’t let this put you off, because Microgaming has excluded them for a good reason. The game’s lack of special symbols ensures that all attention is on the reels. By making the game fairly simple, players get the full benefit of its 243 ways to win.

The Giant Respins feature is the only one that exists - and it’s a good one! When a winning combination is created, a burst of golden light erupts from the surroundings of one of the symbols on the screen. If that light then falls on a symbol which is part of the winning combination, the feature comes into play.

The reels will change to include expanded versions of the symbol in question (up to a 4x4 square of symbols), and the reels will spin again. As the odds are now firmly on the player’s side, it’s highly likely that this will result in a good payout.

Amazing Aztecs is compatible with a whole range of mobile devices. Microgaming has gone to great lengths to ensure that the most popular ones have been catered for, and the game works on Apple and Android as you’d expect. It’s perfect for tablets and it can be played on smartphones too, with no downloads necessary. The layout and symbol design are suitable for smaller screens, and the mobile version has all the same features you’ll find on desktop.

Amazing Aztecs is a speedy online slot which grabs your attention and doesn’t let go. Inspired by ancient civilisations and Aztec legends, this is an atmospheric game with huge winning potential. There are 243 ways to win on every spin, and players can bet up to £100 each time. The game works on mobile as well as desktops, and it’s ideal for those looking for a fun twist on a traditional online slot. See if you can activate that Giant Respins feature as you spin the reels of this Microgaming classic.