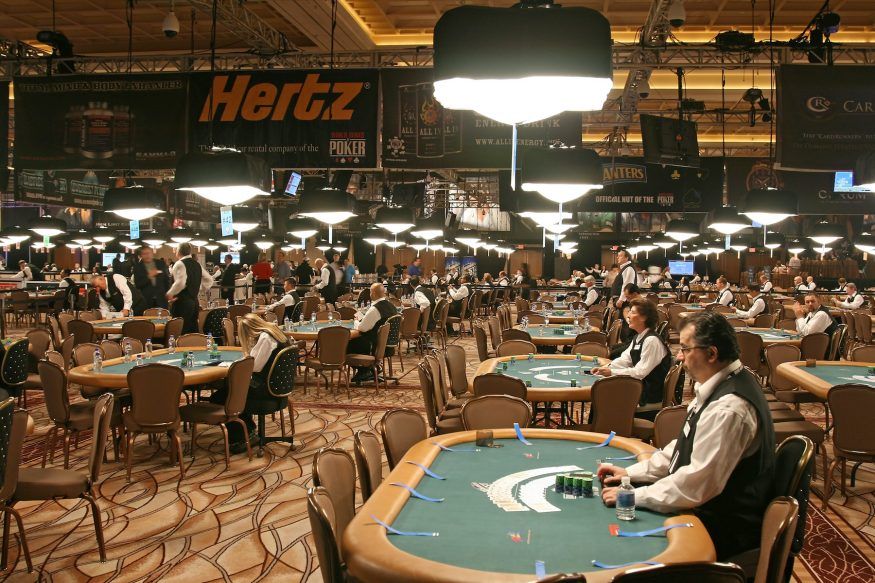 If you’ve ever visited Las Vegas during the World Series of Poker or even just enjoyed watching the event on TV, you’ll be aware of how massive it is in every sense of the word.

Dozens of tournaments, tens of thousands of players, and millions of dollars – all of it squeezed into a few weeks of the exciting poker action.

Every year, as the series draws near, you’ll see numerous TV and online ads inviting people to join the fun. For Caesars, the company currently owning all rights to the WSOP, it makes sense to spend a lot on marketing.

They want as many people as possible to visit, enter tournaments, play in cash games, and try their luck with some casino games too.

But the corporate guys aren’t the ones on the ground.

Their job is to try and motivate people to play in the World Series of Poker, but once they arrive, someone needs to take care of all the logistics and make sure things run smoothly.

It’s these people who make WSOP possible year after year, although they often don’t get enough recognition.

So, this article will be about all the essential jobs at the World Series of Poker that people don’t know or often forget about.

Tournament directors are essential staff at every World Series of Poker event. Since every WSOP comprises dozens of tournaments, someone needs to be there to run them.

If you happen to be new to poker, you might be confused about what a tournament director (TD) does, so I’ll try to explain it.

Fundamental poker rules are quite simple, but when you’re organizing an international tournament with hundreds of thousands or even millions on the lines, everything has to be perfect.

With so many hands dealt every day, there are bound to be situations where the dealer alone can’t make the call.

For example, someone had announced an all-in when it wasn’t their turn to act.

As someone calls, they start complaining that they couldn’t see the other player’s cards and that they made the play by mistake.

This is just one example out of many that would likely require the attention of a tournament director.

These people need to know WSOP rulebooks by heart at all times.

So when they get called over and the situation is explained, they’ll make a decision based on the official rules of the series.

Their decision is usually final, and all players at the table have to abide by it. Refusing to act according to a TD’s decision will only result in a penalty and eventual disqualification if you persist.

Most players know better than to argue with WSOP TDs, but some still try it.

Every now and again, they’ll manage to get a senior TD called over to make a ruling if they’re not happy with the initial decision, but it rarely happens that they make a different ruling.

Although tournament directors at the WSOP often get a lot of heat from the poker public and the media, they’re mostly just following the official WSOP rulebook. They aren’t making things up as they go.

It happens now and again that a situation arises where rules aren’t clear enough.

This is where TDs will have some freedom and need to use their best judgment to make the call.

It’s true that they don’t get it perfect every single time, but most of them have been running tournaments for years, so if they don’t know the right answer then it’s probably a really strange situation that could go either way.

You should know that WSOP tournament directors are selected from a pool of the industry’s most experienced and knowledgeable people.

After all, this is the biggest event in all of poker, so they won’t allow someone to walk in off the street and run the show.

That said, it may sometimes happen that there is an inexperienced TD running a smaller side event.

If that happens and they make a ruling that you feel is unfair and not in line with official rules, you can always ask for a senior TD to come in.

But you should be pretty sure you’re in the right; otherwise, you’ll just be wasting everyone’s time and it won’t win you any points with the staff, either.

The World Series of Poker needs quite a few tournament directors, but that number pales in comparison to how many dealers are required each year.

Just think about a tournament like the Main Event, where there can easily be a couple of hundred tables running at any given moment.

You need a few hundred dealers right there just to cover that one tournament.

And at the WSOP, there are usually a few tournaments running concurrently.

Every year, people from all over the US will flock to Las Vegas to pitch some cards.

The demand is big, and the dealers can make decent money, so those with the knowledge and the experience will often spend the summer months dealing in Las Vegas.

Even though they need a proper army of dealers of around 1,200, according to Jack Effel, WSOP organizers won’t accept just anyone who can throw cards across the table.

For those who’ve never dealt at the WSOP before, there is an audition during which the dealer must show their skills.

It’s not enough to know just Hold’em, though, as all dealers are expected to know other variations, including Omaha and different stud and draw formats.

Besides technical abilities, the dealer will have to answer a few general questions about the game. If they pass, they’ll be invited back to deal at the WSOP.

Those who pass the audition once don’t have to take it again the next year and will usually have a spot waiting for them at the series if they performed well in the past.

Good dealers aren’t that easy to come by, so those who show they have what it takes to do their job in the high-pressure environment are usually welcomed back.

There is a hierarchy of sorts among WSOP dealers as well.

If someone comes to Las Vegas for the first time and passes the audition, they’ll usually cover lower buy-in events and earlier stages of larger tournaments.

The dealer usually needs to have at least three or four years of experience under their belt to deal a final table.

Since this is the most important point in any tournament, the WSOP makes sure players get someone with the experience.

All of it makes perfect sense.

For the players, it’s good because dealer mistakes at the final table can cost someone serious money. For the new dealers, this doesn’t put them in an awkward spot.

If you have no experience dealing in the large final tables, you’ll certainly feel the pressure, which can cause you to make mistakes that you’d never make in a more relaxed environment.

Does It Pay Off To Deal Cards At The WSOP?

According to Jack Effel in an interview a few months back, WSOP dealers are paid $9 per hour and also receive a small portion of each buy-in.

This money is split between the dealers at the end of the series. In general, the number going out to the WSOP dealers is around 2 percent of all prize pools, which is a fair chunk of money.

As far as dealing cards go, doing that at the World Series of Poker certainly makes sense.

There is definitely some money to be made as the action is non-stop.

Additionally, those who make the cut for the WSOP can pretty much count on work the next summer. This is a pretty big incentive in the casino industry, which can be shaky at the best of times and jobs are hardly guaranteed.

Of course, some players will still tip after a big score on top of these guaranteed payments.

While I can’t say that I know for certain what the WSOP’s policy on tips is, it’s safe to assume that the dealers at least get a portion of it.

There is also the added benefit of being there for the World Series of Poker and enjoying all the buzz and excitement while getting paid for it.

There are many people who are part-time poker dealers and enjoy this aspect more than anything else.

You get to be right in the middle of the action. It may not be as exciting as actually playing the tournaments, but it’s probably the next best thing.

Finally, from a professional standpoint, it’s a great thing to have on your CV.

If you were good enough to deal cards at the WSOP, you should have no problems getting a job at a local casino. It can easily put you well ahead of other candidates.

If this sounds like something you’d like to try, the good news is that WSOP auditions new dealers every year. You can find all the information on the official World Series of Poker site and their social media accounts.

You’ll need to have some prior dealing experience or a certificate from a dealer school, but the requirements are not that harsh.

Just make sure you’re also proficient with non-Hold’em games, as the dealers who can deal other games have a huge advantage.

Dealers and tournament directors ensure everything goes smoothly on the floor, but someone also needs to get the information out there.

People want to know what’s happening at the Rio at all times.

Not everyone can travel to Las Vegas during summer, but they’ll have friends and relatives playing in the tournaments, and they want to know how they’re doing.

And, of course, poker fans from all over the world want to know how their favorites are doing as well.

Is Phil Ivey there? Did Hellmuth win another bracelet? Are there any controversies going on they need to know about?

Getting this information out there is the job of poker reporters and bloggers who spend hours every day running around the tournament floor, making notes, taking pictures, and filming videos to try and get them out as quickly as possible.

Some of them are employed by the WSOP and some are sent by other poker media outlets.

It’s definitely an understated job as these people often don’t get paid much (or even at all) and many of them are doing it because they love the game and simply enjoy being around all the action.

Thanks to their efforts, we get timely reports and updates, and we know what’s happening inside Rio around the clock.

If something important happens, you’ll know in a matter of minutes, as it will be posted on social media and news portals, giving you almost real-time insights into what’s happening at the WSOP.

While TDs and dealers make sure cards are in the air and chips are moving back and forth, poker reporters and bloggers have certainly helped popularize the game and attract new players from all over the world.

Apart from a select few, they rarely get much credit for their work. If you’ve ever tried reporting live, even from a small tournament, you know how crazy things can get.

So there you have it – some of the essential WSOP staff that make it all possible. Without their work and dedication, there would be no World Series of Poker.