It is a debate that has raged on through the ages. Now it appears to have finally been resolved. The question of whether violent video games have any negative psychological effects on players has been answered with a resounding no.

Columbine… Where the Argument Began

On 20th April, 1999, two senior students at Columbine High School, Eric Harris and Dylan Klebold, walked into their school and killed 12 students and one teacher.
They also injured a further 21 people during the rampage. Afterwards they turned their own guns on themselves.

In the aftermath of the atrocity, controversial comments were made claiming that the pair had been psychologically affected by excessively playing video games.

The basis of the argument was that one of the perpetrators had named their gun “Arlene”. It was reported that this was a tribute to a character in a novel based on the classic first person shooter Doom.

Previous violent incidents had blamed games such as Mortal Kombat and Goldeneye but the Columbine shootings launched the debate into the mainstream.

Ever since the late 90s, the debate about video game violence has swayed back and forth. The anti-gaming gang’s views are summarised in a paper about the General Aggression Model (Anderson & Bushman, 2002; Anderson & Carnagey, 2004). In this paper the scientist are adamant that violence in video games does have a negative impact on the psychology of those playing the games.

Supporters on the other side of the argument say there are no clear links between taking part in violent video games and actually perpetrating violence in the real world.

The release of violent games such as Grand Theft Auto, Call of Duty and Hitman over the years has only increased. With it the appetite to blame video games for the violent actions of individuals in real-life has also grown.

Unfortunately, despite these games being given 18 ratings, they are still accessed on a mass level across the globe by underage players. This has led to a distinct group of people claiming that playing the games is dangerous for children. They say it can lead to serious mental problems even though there is far more evidence showing the opposite is true. 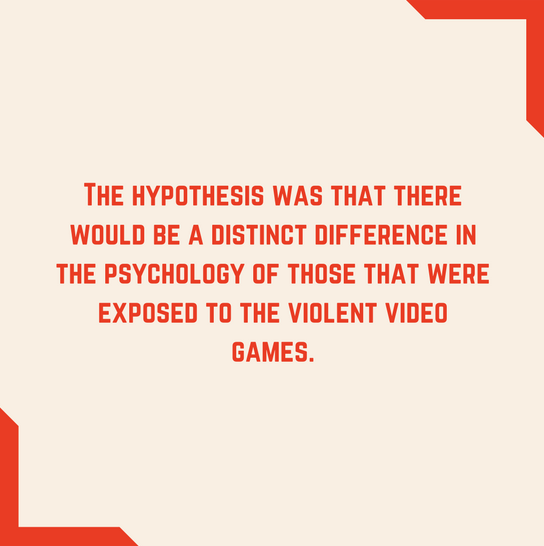 Thanks to innovative new research by a team led by Dr Gregor R Szycik at the Department of Psychiatry, Social Psychiatry and Psychotherapy at the Hannover Medical School, the evidence that video games don’t turn you into a psychopath is building up. Frontiers in Psychology.

The study published in Frontiers in Psychology revolved around 30 people. 15 of the participants played violent video games for four hours a day and 15 did not play the games. The hypothesis was that there would be a distinct difference in the psychology of those that were exposed to the violent video games.

During the study the test subjects were asked a series of psychological questions. Afterwards they were placed in an MRI Scan and shown a series of images designed to evoke emotional responses. They were also questioned about how they felt in certain scenarios whilst looking at the pictures. The MRI Scan was then used to measure neural activity compared to the answers.

After all the research was done and the results were collated, the study came to one conclusive finding.

There was absolutely no evidence to suggest that playing violent video games has a negative impact on the psychology of individuals.

Is The Debate Finally Settled Then?

This study has delivered overwhelming results in favour of the theory that violent video games do not cause mental health problems. However, the cynics in the world will point to a number of potential flaws in the study.

The study involved adults-only and did not involve children. The average age of subjects was 22 years old. Previous controversial cases where video games have been blamed for violent episodes have involved younger individuals who are more susceptible to being influenced.

It could also be argued that the choice of games was quite liberal. Call of Duty and Battlefield were the chosen games for the study. More violent games were shunned, so the study cannot claim to be comprehensive in its coverage of games.

No doubt, this is a big win for those in the camp that deny video games provoke violent episodes in individuals. That said, the counter-argument will no doubt materialize once again soon.

For the time being, it is very much advantage to those that have denied there being a link between excessively playing violent video games and their negative effect on the psychological of individuals. Unfortunately, this is not likely to be where the controversy ends.

4 Insane Graphics of The New Normal – Casinos in The Coronavirus

With COVID-19 hitting the globe with a heavy hand there’s not a single industry that hasn’t been affected. Whilst gambling...

Poker may be just a game of cards in its essence, but it can give you much more than just...

10 Fighters Who Tragically Died From Injuries in The Ring

Every time a fighter courageously steps foot in the ring, they literally put their lives at risk. The majority of...